Richard Osmond, Chairman and Interim CEO, comments, “The initial drill results from Elida are very encouraging. The long, well-mineralized intervals from the first two holes demonstrate that attractive copper grades extend down from the bedrock surface with good vertical continuity. This higher-grade portion of the mineralized zone remains open at depth and will require further drilling to determine its vertical and lateral extents. The copper grades are complemented by molybdenum grades, which are significantly higher than many well-known porphyry copper deposits. We are also very fortunate to have low arsenic concentrations associated with our copper mineralization, which is critical to the production of a saleable copper concentrate. The attractive drilling results to date enhance our belief that Elida can be a large-scale copper project benefitting from low elevation and proximity to important power and transport infrastructure.”

Management will host a webcast at 2:00pm ET on October 19, 2021 to discuss the Elida drill program – register HERE.

1   Copper equivalent grades (CuEq) are for comparative purposes only. Calculations are uncut and recovery is assumed to be 100% as metallurgical data is insufficient to allow for estimation of metal recoveries. Copper equivalence (CuEq %) is calculated as: CuEq (%) = Cu (%) + [3.55 × Mo (%)] + [0.0095 × Ag (g/t)], utilizing metal prices of Cu - US$3.34/lb, Mo - US$11.86/lb and Ag - US$21.87/oz. Metal prices are based on a 2-year average of monthly LME metal prices.
2   Intervals are downhole drilled core lengths. Drilling data to date is insufficient to determine true width of mineralization. Assay values are uncut.

The 4,000 m diamond drilling program in progress at the Project (as announced on August 4, 2021) is focused on testing Target 1 with the objectives of: (1) investigating the vertical continuity and zonation of Target 1 mineralization, (2) improving the confidence in the interpreted mineralization boundaries, and (3) achieving a drill hole spacing that is appropriate for estimating a potential mineral resource for a portion of Target 1.

ELID019 returned a continuous interval of strong mineralization (383.75 m at 0.54 % Cu, 0.035 % Mo, 4.2 g/t Ag for 0.71 % CuEq) down to a depth of 426.9 m, where the central, weakly-mineralized quartz monzonite porphyry stock (“QMP”) was encountered. The hole demonstrated strong Cu-Mo mineralization intersected by ELID012 extends up to the bedrock surface, beneath 43.15 m of unconsolidated colluvial gravel. The interval in ELID019 is characterized by potassic alteration with multiple veining events that introduced copper and molybdenum with chalcopyrite as the dominant copper bearing mineral. Further drilling is required to trace the zone of strong copper mineralization to greater depths and to determine its overall horizontal width. The mineralized interval contains low concentrations of arsenic (e.g., As <50 ppm) and other deleterious elements. Drilling data to date shows no correlation between copper and arsenic, suggesting arsenic is not associated with the copper sulfide minerals. This is significant as high arsenic concentrations, typically resulting from late-stage epithermal overprinting, can be detrimental to the economics of a porphyry copper deposit. Such epithermal events are not observed at Elida.

Both drill holes demonstrate the mineralized zone remains open at depth. The 400 m vertical interval from the bedrock surface to the depth of investigation of ELID019 and ELID020 shows no recognizable vertical zonation of alteration or mineralization, supporting an exploration hypothesis of a mineralized zone extended in the vertical dimension. Subsequent drilling programs in the Target 1 area will be designed to test the vertical extent of mineralization as well as the lateral and vertical copper grade distributions.

Project Update
Based on drilling completed to date, the Company expects to meet its objective of completing the program by the middle of Q4, 2021. The two drill rigs have commenced the last two holes of the planned six-hole program. ELID023 is designed to test the southern arm of the Target 1 mineralized zone surrounding the QMP by drilling from the QMP outwards toward the southern limit of mineralization. This hole is important for understanding the extent and character of mineralization on the southern side of the QMP stock.  ELID024 is collared on the west side of the QMP and angled east from the interpreted outer limit of the Target 1 mineralized zone. This hole is positioned to test the outer limits of the mineralized zone and volume of mineralization on the northwest side of Target 1. Sampling and analysis of completed holes is progressing well and results will be released when available.

Analytical Quality Control & Quality Assurance
Elida Resources S.A.C., a wholly owned subsidiary of Element 29 Resources Inc., supervises drilling and carries out sampling of HQ core. Logging and sampling are completed at a secured Company facility situated near the Elida project site. Sample intervals are nominally 2 m long. Drill core is cut in half using a rotary diamond blade saw and samples are sealed on site before transportation to the ALS Peru S.A.C. laboratory in Lima by Company vehicles and staff. Samples are analyzed for 35 elements using an Aqua Regia digestion and ICP-AES analysis (ME-ICP41). Samples reporting over limits are analyzed by Aqua Regia digestion with ICP-AES finish (ME-OG46). ALS meets all requirements of International Standards ISO/IEC 17025:2005 and ISO 9001:2015 for analytical procedures.

Element 29 employs an independent, internal quality assurance/quality control program that includes insertion of duplicate, blank, and certified reference samples at the field site. The Company is not aware of any drilling, sampling, recovery, or other factors that could materially affect the accuracy or reliability of the data reported.

Qualified Person
The scientific and technical content of this press release has been reviewed and approved by Paul J. Johnston (PhD, PGeo), who is Vice President of Exploration for Element 29 and is a “Qualified Person” as defined in National Instrument 43-101 Standards of Disclosure for Mineral Projects.

About Elida
Elida is a porphyry copper-molybdenum exploration project within a property composed of 28 mining concessions totaling 19,210 hectares that are 100% owned by Elida Resources S.A.C., a Peruvian subsidiary of Element 29. The property contains a large, 2 x 2 kilometre (“km”) alteration system enclosing a cluster of porphyry centres that represent five distinct exploration targets. A first-pass drill program consisting of 18 diamond drill holes totaling 9,880 m completed in 2014/15 identified significant copper, molybdenum, and silver mineralization associated with a QMP stock at Target 1. The remaining four large targets are untested. Under the current drill permit, the Company can elect to drill-test all identified targets.

The Project is located in central Perú, approximately 85 km inland from the Pacific coast at moderate elevations between 1,500 and 2,000 m and close to transportation and power infrastructure, including a 45 mega-watt hydroelectric generation facility situated 15 km from the project.

About Element 29 Resources Inc.
Element 29 Resources Inc. is an emerging copper exploration and development company focused on advancing its portfolio of Peruvian projects towards development in one of the world’s lowest-risk mining jurisdictions. Element 29’s growth strategy is led by our strong board and management, who have a proven track record of discovery and delivering significant value to our shareholders.

The Company’s principal objective is to explore and develop its flagship Flor de Cobre porphyry Cu-Mo project located in southern Perú, 26 km southeast from Freeport-McMoRan’s Cerro Verde Cu-Mo mine. At the same time, the Company intends to build on its potential copper inventory with continued exploration of its Flor de Cobre project as well as its remaining 22,000 ha of mining concessions in Perú, including the recently discovered Elida porphyry Cu-Mo-Ag system located in central Perú and 85 km from the coast. Both projects are well located for future mine development and will benefit from nearby infrastructure including roads, powerlines, ports, water, and a skilled workforce.

More information is available at www.e29copper.com.

Forward-looking Statements involve various risks and uncertainties and are based on certain factors and assumptions. There can be no assurance that such statements will prove to be accurate, and actual results and future events could differ materially from those anticipated in such statements. Important factors that could cause actual results to differ materially from the Company's expectations include uncertainties related to fluctuations in copper and other commodity prices, uncertainties inherent in the exploration of mineral properties, the impact and progression of the COVID-19 pandemic and other risk factors set forth in the Company’s prospectus under the heading “Risk Factors”. The Company undertakes no obligation to update or revise any Forward-looking Statements, whether as a result of new information, future events or otherwise, except as may be required by law. New factors emerge from time to time, and it is not possible for Element 29 to predict all of them or assess the impact of each such factor or the extent to which any factor, or combination of factors, may cause results to differ materially from those contained in any Forward-looking Statement. Any Forward-looking Statements contained in this press release are expressly qualified in their entirety by this cautionary statement.

Figure 1. Plan view of Target 1 at the Elida Porphyry Cu-Mo project. Holes ELID001 – ELID018 were completed by Lundin Mining in 2014/15. Drilling has commenced ELID023 and ELID024, which are the last 2 holes of the planned Phase 1 program.  The location of sections for Figures 2 and 3 are indicated with white dashed lines. 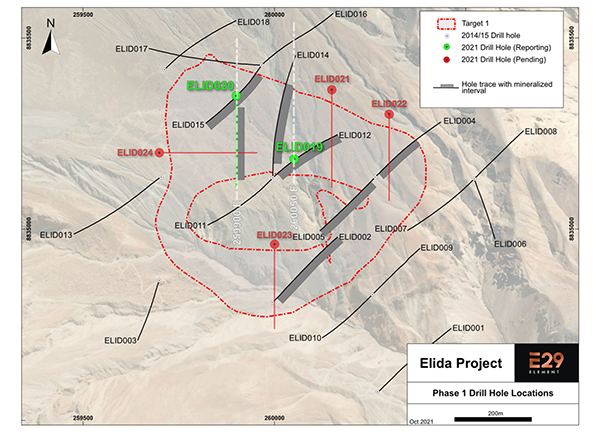 Figure 2. Cross section at 260050 E showing the position of ELID019. The hole encountered strong mineralization immediately beneath 43.15 m of unconsolidated gravel (colluvium). Continuous Cu-Mo-Ag mineralization was intersected down to 426.6 m, where the contact of weakly mineralized QMP occurs. Additional drilling is required to trace the zone of strong mineralization to greater depths. 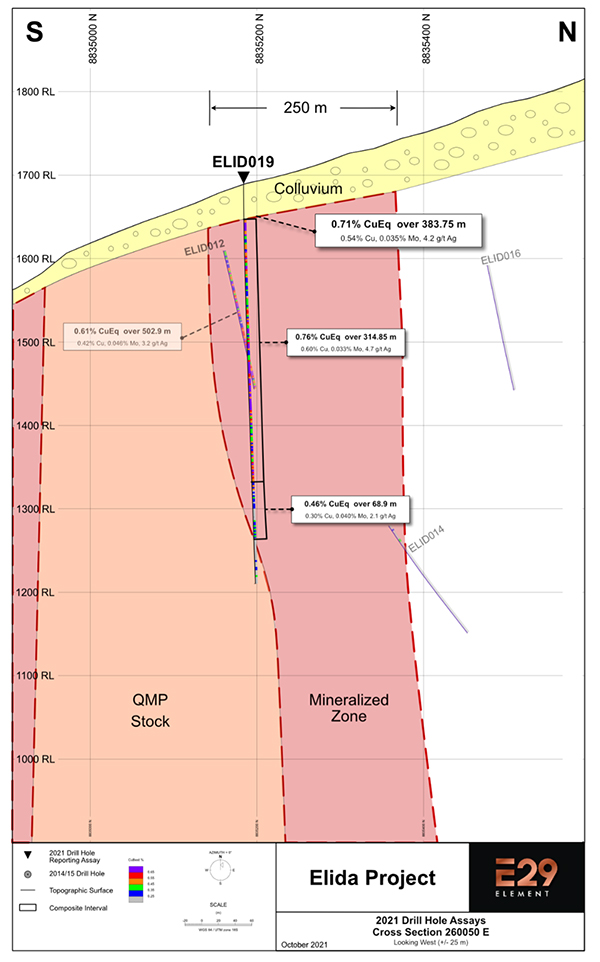 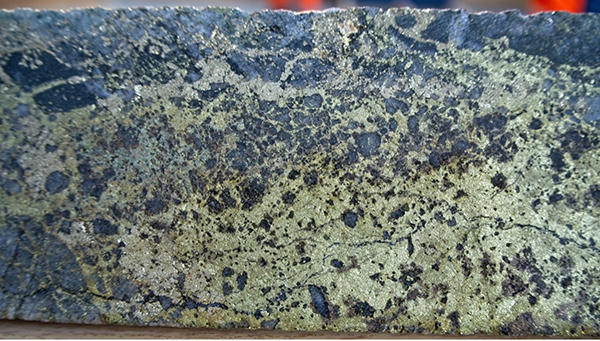 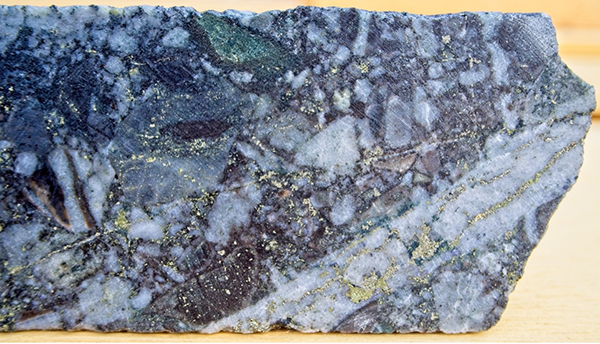